We had an FPN-Philippines pen meet yesterday, and I managed to convince my friend (and favorite fountain pen ink reviewer) Clem Dionglay to accompany me to visit Scribe Writing Essentials in Eastwood City so she could help me choose some ink.  Based on Clem’s writing samples on a Rhodia dot pad, I managed to quickly narrow down my choices to J. Herbin Vert Olive and Rouge Opera.  These are not my first J. Herbin inks – I’ve written about Violette Pensee and Vert Empire before.  I was also sent Poussiere de Lune and Lie de The by Karen Doherty, VP of Exaclair, Inc. (the distributor of J. Herbin, Clairefontaine and Rhodia in the US).  She also sent Clem an Orange Indien that I won in an FPN-P raffle last year.  (I owe her a few ink reviews, but I’m hoping this would suffice in the meantime.) 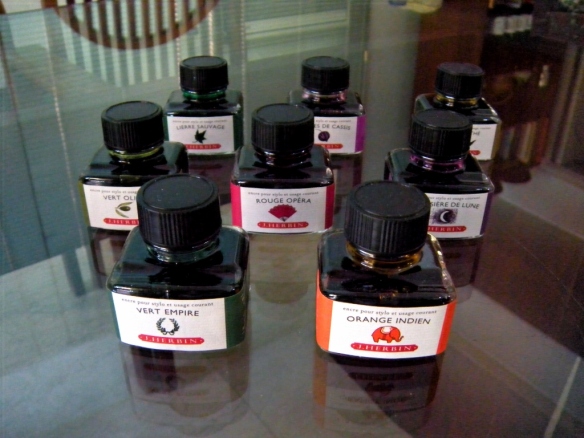 I realized when I got home that I have now accumulated eight Herbin inks:  Violette Pensee, Vert Empire, Lie de The, Poussiere de Lune, Orange Indien, Larmes de Cassis, Vert Olive, and Rouge Opera.  I plan to get more later.  In fact, Clem and I have established that for fountain pen users, there should be no guilt about having a lot of ink.  Appreciating color is a joy in life!

Out of the eight, three inks were green.  Green is my favorite color, and I do appreciate the range of greens I got.  I decided I’d do a side by side writing sample, to be posted on the Fountain Pen Network Ink Reviews forum.  Here it is: 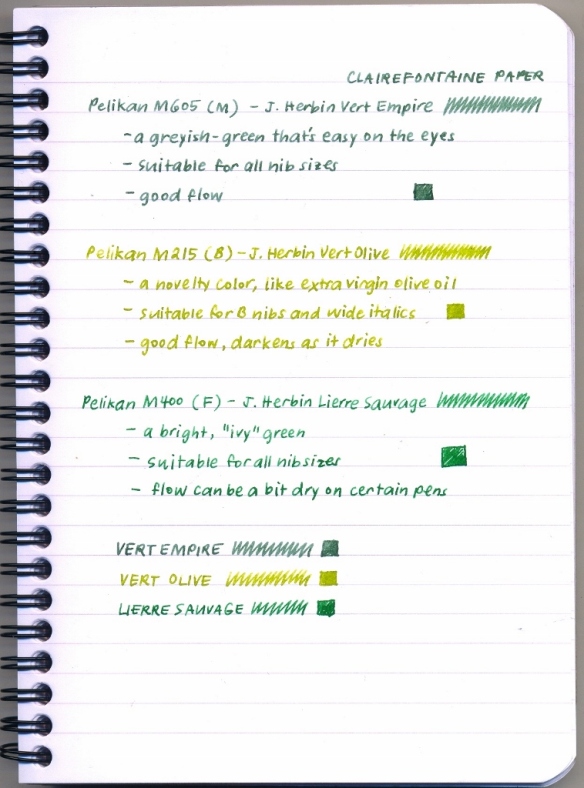 Vert Empire is a dignified, elegant dark grey-green.  Lierre Sauvage is a bright leaf green, a cheerful color that can pop out on the page.  While Vert Empire and Lierre Sauvage do well in finer nibbed pens, Vert Olive requires a wide nibbed pen for you to see the nuance in color.  Some people may have difficulty reading it on certain colors of paper.  It looks more like olive oil rather than the green olive itself. While I don’t plan to use it for letter-writing, I am comfortable using it as a journalling ink (with my Pelikan M215 B nib).  Something about the color refreshes me, I really bought it as a novelty.  One day I might try mixing it with some Lie de The to achieve a slightly darker olive tone.  I’ll update this blog when that’s successful.

I’ll do another blog entry on the rest of my inks later, next would most likely be a comparison of purples and red-pinks (Violette Pensee, Larmes de Cassis and Rouge Opera).

J. Herbin inks are available in the Philippines at Scribe Writing Essentials (3/F, Eastwood Mall, Libis, Quezon City) and the Scribe stall inside Powerbooks in Greenbelt 3, Makati.  They come in 30ml “demi-courtine” bottles, at PhP 495 each.  Pricey, compared to the ubiquitous Parker and Waterman inks, but the range of colors is worth it.

I’m not affiliated with Scribe, am just a happy customer.