Few things give me greater joy than to resurrect something and make it useful again.  You can’t blame me for having a soft spot for these frankenpens – fountain pens cobbled together from various spare parts of the same model.   At the top is a Parker 51 demi with a vacumatic filler with the engraving “Josephine O’Hara”.  In the middle is a Sheaffer Craftsman lever-filler with an Admiral cap.  At the bottom is a Sheaffer thin model Touchdown. 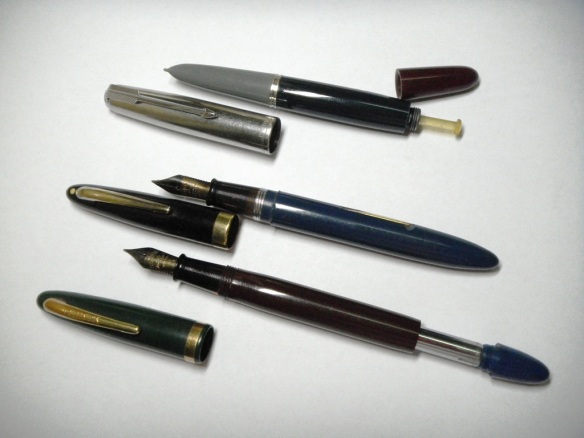 These were created for me by a good friend, Tom Overfield, from spare parts in his pen repair cabinet.  The Parker 51 demi was a gift, in time for the first anniversary of our Manila pen group in 2009.  The other two were commissioned.  I had won a lot of three user-grade Sheaffers with slightly shrunken plastic barrels on eBay for a low price (the price of the 14k nibs alone was worth more than what I paid) and asked him if he could en-franken them.  I got a blue Sheaffer Craftsman lever-filler out of that, plus the two Sheaffers in the above photos.  I love them all.

Five years later, all are still in good condition.  None of the latex sacs or the seals have failed.  They’re not the handsomest pens in my little collection, but they do get a lot of love.  In fact, I use them quite often, even though I have other pens. I believe I got lucky with the quality of the nibs and feeds to begin with.

The term “frankenpen” doesn’t always have a good connotation.  It usually refers to pens that pretend to be the complete, original model (in order to sell at a higher price), when actually the parts are mismatched or come from different brands or even time periods.  These don’t pretend to be anything other than functional revivals of pre-loved vintage pens – they wear their colors proudly!  A number of us on FPN-Philippines own multi-colored frankenpens made by Tom, and we all cherish them deeply.  So much so they have been given unique names like Frankensnork (Leigh Reyes’ pen), Bride of Frankensnork (Caloy Abad Santos’ pen), Tuckenstein (a Tuckaway, Raffy Abrina’s pen), Thinenstein (Jenny Ortuoste’s thin Touchdown), Demistein (my Parker 51), etc.  Some of them are also with his friends in Europe and the USA.

If only some modern production pens wrote as well as these frankenpens!