There are still fountain pens being made in the USA, and one brand that comes to mind is Bexley. It’s a relatively new company that started in 1993, manufacturing pens out of Columbus, Ohio.  Many of their designs are inspired by classics from the so-called Golden Age  of Fountain Pens.

My new pen, the Bexley Poseidon Magnum II, is one of their current offerings.  It’s a piston-filler that comes in three colors: Bronze Sands, Green Seas and Blue Lagoon.  The Bronze Sands is made from a swirly, marbled, shimmery brown acrylic resin, with gold trim. It actually reminds me of that old Magnolia Ice Cream flavor from my childhood, Chocolate Marble (when you open the tub, you see these rich veins of chocolate in the ice cream).  I believe no two Poseidon Magnum II’s are alike, as the swirls are pretty random.  That makes it easy for me to identify my own pen at a pen meet – Bronze Sands is so popular that I must be the third or fourth member of Fountain Pen Network-Philippines to own one. 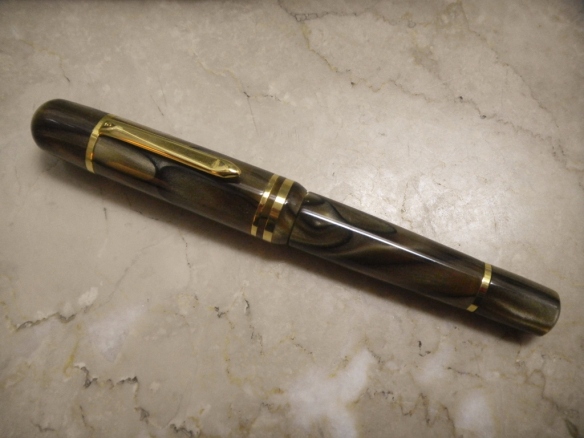 It’s 57/16” capped and 67/8” posted, according to Richard Binder – roughly the size of a Pelikan M600.  The barrel has a girth that makes it comfortable to hold, similar to that of a Montblanc 146. Definitely not a slim pen, but it’s lighter than it looks.

There was an earlier Poseidon model.  A larger Poseidon Magnum model later followed.  Both are cartridge/converter models. In fact, a couple of years earlier, I had seen the Poseidon Magnum in black, at one of our pen meets.  At the time I remember being attracted to the Poseidon Magnum because of its similarity to the classic Pelikan 100N.  The peaked cap, the cap rings, the general shape of it.  Alas, I had no budget for a pen at the time, so I tried to move on.  Earlier this year, I was asked by another friend which Bexley pen model to buy, this Poseidon Magnum II or the Corona? Both were piston-fillers.  As a matter of fact, I also own the Corona, in Lemon Meringue. The Corona is no slouch, but I steered him toward the Poseidon Magnum II, which I felt had a more luxe, premium feel.  A few months later I saw it again on someone’s Facebook wall, and asked myself why I didn’t own it yet. It’s a beautiful pen.  If I’d had a bigger budget I’d have gotten it with an 18k nib.  As it is, I’m happy with the stainless steel nib, which is a smooth, wet F.

If you are in the Manila, and want to get your own Bexley Poseidon Magnum II, join Fountain Pen Network-Philippines.  The members will happily put you in touch with the local Bexley distributor.